Why You Should Eat Your Frog First Thing Each Day 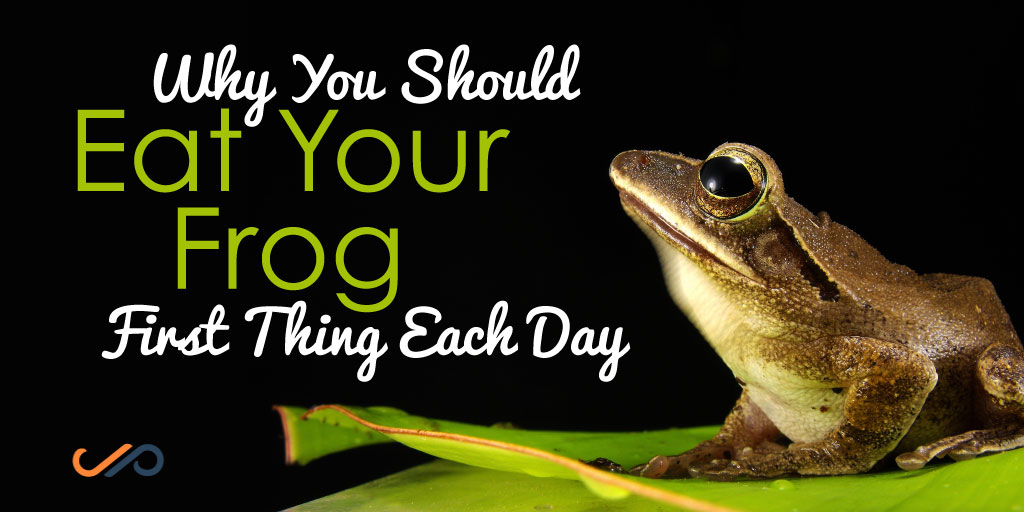 I have struggled with procrastination many times in my life, and I a guessing that you have too.

When I was in high school, and college, I was an extreme procrastinator. Anytime I had a paper due, even if I knew about it for months, I would usually wait until the night before to start writing it. I’m not talking about small papers, I am talking about large research papers. The kind that needs multiple sources for citations. The kind that lead to being stuck at the library for long periods of time.

I would spend the entire night before they were due being awake writing the paper, and then I would convince myself that I did my best work when I was under pressure to help justify my sleepless nights of paper writing.

It wasn’t until after college that I began to realize that I had ben lying to myself for all those years.

Did I get my papers turned in?

And did I get good grades on them?

However, if I am being honest with myself I know that there is no way I was able to write as well under that much pressure as I could have written if I had made a plan and worked on it in smaller pieces over a longer period of time.

I didn’t really care though because I told myself that this only applied to writing research papers, and that after college I wouldn’t have to write anymore.

I have since realized that this type of procrastination affects every area of my life.

Shortly after college I found a book called Eat That Frog!: 21 Great Ways to Stop Procrastinating and Get More Done in Less Time by Brian Tracy, and it made me realize how important it is to stop procrastinating.

Brian Tracy describes a “frog” as:


“Your biggest most import task. It is the one that you are most likely to procrastinate on if you don’t do something about it. It’s also the one task that can have the greatest positive results on your life at the moment.”

After reading this book I began to search out my “frogs” and take action on them. I am not perfect at it by any means, but I have seen great results from changing my thinking and focusing on making an effort not to procrastinate.

Now I try to tackle my “frogs” first thing every day, and on the days that I do so I see how much of a difference it makes.

3 Reasons to “Eat Your Frog” First Thing Each Day.

If you haven’t ever read the book Eat That Frog!: 21 Great Ways to Stop Procrastinating and Get More Done in Less Time by Brian Tracy I would highly recommend that you give it a read.

The principles from that book have helped me to become less of a procrastinator, and can help you too.

Make it a goal to start “eating your frog” first thing each and every day. Decide what your biggest, most important task is and take action on it first thing in the morning.

Doing so will help you to get far more done, and achieve far greater success!