Think Big: The 3 Differences Between Scary and Unrealistic 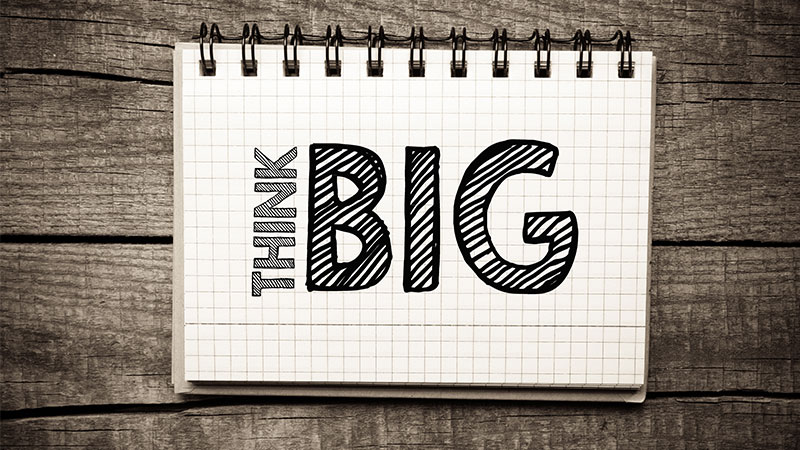 Have you ever set a goal so big that people told you that you would never be able to achieve it? Maybe it wasn’t other people, maybe it was you. We have all had times our lives that we have set a goal, or desired something, but have been talked out of it due its perceived difficulty to achieve. Many times we are the ones that talk ourselves out of our own goals.

Growing up I was blessed to be part of a family that encouraged me to “be anything I wanted to be.” Not everyone is as fortunate however. While growing up you may have had family, or friends, who shot down your ideas and told you but you wouldn’t be able to achieve the things you wanted.

It’s common to hear people say “that’s unrealistic” when they are told about something that seems very difficult to them. But is that idea truly unrealistic?

There are tons of things that may seem unrealistic to one person but are very possible for someone else. We have gotten to used to using the word “unrealistic” to describe something that we are unsure of.

Unfortunately you have limited control over what others say to you. You can’t stop them from telling you that your dreams and goals are unrealistic. You can distance yourself from negative people tho, or you can choose to ignore them. It is important to surround yourself with others that will encourage you, rather than pull you down.

But even more important than that… you need to support yourself. Get rid of the negative thoughts that you have. You are 100% in control of everything that you think!

Most ideas we have aren’t unrealistic, they are just scary.

[ctt tweet=”Most ideas we have aren’t unrealistic, they are just scary!” coverup=”dqi4e”]

And that’s great news! Scary doesn’t mean it can’t be done, it just means it will be scary. It will stretch you and make you uncomfortable. But that is where you grow. It takes extreme heat to form steel. It takes heavy weights to form muscles. And your goals and dreams are no different.

What do you think people said when the Wright brothers told them about their idea for an airplane? I bet they were told they were being unrealistic.

For many years people thought that running a sub 4-minute mile was unrealistic because nobody had ever achieved the feat. The common belief at the time was that your heart would explode if you ran that fast. But on May 6th, 1954 Roger Bannister became the first man to ever achieve that goal. Just a mere 46 days later his record was broken.

What allowed the unrealistic goal of running the sub 4-minute mile to become so achievable all of the sudden? Bannister realized that it wasn’t unrealistic, just scary. And by doing so he gave others the confidence to achieve the same goal.

3 Differences Between Scary and Unrealistic

Next time you hear someone else, or yourself, say that a goal is unrealistic ask yourself the following questions:

Only you can determine what is and isn’t realistic for you. Don’t throw in the towel just because other people don’t believe in your dreams. Stretch yourself and go after your scary goals!

Question: What scary goal do you have that has been posing as being unrealistic? Join in on the conversation on Facebook or Twitter!

The Incredible Power of Positive Self Talk
February 18, 2015

Are You Feeding Your Mind the Right Things?
February 16, 2015