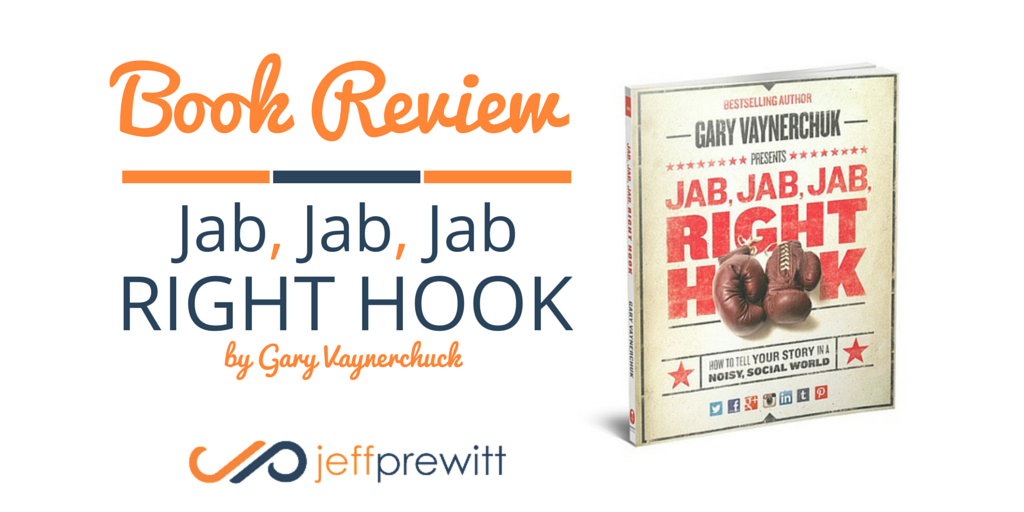 This week I read Jab, Jab, Jab, Right Hook: How to Tell Your Story in a Noisy Social World by Gary Vaynerchuck. Gary is the New York Times bestselling author of Crush It! and The Thank You Economy. He is also an entrepreneur, and investor.

Originally best known for his YouTube show Wine Library TV, Gary has an amazing story about how he took over his dads liquor store, Shoppers Discount Liquors, and grew it from a $3MM per year business to a $50MM per year business in just 7 years. He is also the founder of and CEO of VaynerMedia, a digital consulting and social media agency, which is growing a an unbelievable pace.

It seems like Gary is everywhere these days. He is considered my many to be one of the best, if not the best, on the topics of social media and entrepreneurship.

Why Should You Read This Book?

I would consider Jab, Jab, Jab, Right Hook a must read for anyone who uses social media for their business.

If you are an entrepreneur, this means you!

This book completely changes the way that most people think about marking and selling to their customers over social media.

So does that mean that you cannot market and sell to them on social media? Not at all. In fact, Gary shows how it is the perfect place to do so, as long as it is done correctly.

Gary shows how to use your business social media to create a story, and connect with people on a human level. By giving lots of great value – jabs – brands are able to later sell – right hooks – much more effectively.

Jab, Jab, Jab, Right Hook is broken down into sections that cover each of the major social networks. Gary gives you insight into each network, and what makes it unique.

Each network has it own look, feel, and language. To be effective you have to know how to speak that language, and the great thing is that Gary makes it really easy to learn.

He gives numerous examples of how companies like Jeep, Mercedes, and many others have used social media successfully (or unsuccessfully) on each of the popular social media platforms.

Here Are Some Quotes I Pulled As I Read

If you are an entrepreneur of any kind you need to read this book.

Social media is one of the most influential places to connect with customers and clients. If you are using it the wrong way, or not at all, it is costing your business big time!

This book gives you all the info that you need to build your social media strategy and being connecting with your customers or client in the way that they expect.

Get it today at Amazon or iBooks.

The Legend of the Monk and the Merchant – Book Review
March 6, 2015